Because we had guests coming for Sunday lunch, I decided to make a double batch of potato bread on Saturday. I had an inkling it would be good, because the dough was really frisky: I could barely contain it on the chopping board I use to knead my dough. It was so alive there was no way I could knead it and leave it on the board, covered with a large stainless steel bowl, as I normally do, because it would have pushed right out from the bowl.  So instead I had to put it back into the bowl, and cover it with a tea towel whilst it rested.

I also discovered that it’s so much easier to fold dough, in the fancy way they tell you to (basically folding the dough into three, so take one third of it, fold it into the centre and then the other side, fold in on top) with so much dough. It was really easy to fold in this way, although not easy to keep in any sort of shape. I practically had to pour it into the bannetons.

I cooked one lot in a 1k round on the Sunday but the other I left in a 600g banneton (in the fridge at 4C) til this morning. It had risen hugely and spread out lots on the baking tray the moment I turned it out. I slashed it four times and it looked very collapsed, but I’m used to that with long-prove breads now and hoped it would revive in the oven. It did.

Instead of what I usually do, which is put it in the oven at the highest temperature and then turning it down, I’ve been experimenting with putting the bread in the oven at 220C for the first 8-10 mins, then putting it up higher to 250C, then back down. This is what I did this time.

The bread rose beautifully, had a great crust (heavier and darker than the one I did for Sunday lunch, probably cos of the shape) and OMG it tastes divine. The longer prove has definitely improved the flavour.

I’d go as far as to say it’s very probably the best tasting bread I’ve ever made. I will try to photograph the crumb later (if there is any left), it’s really good. Not overproved (as I feared), kinda waxy, very white. And so moist. 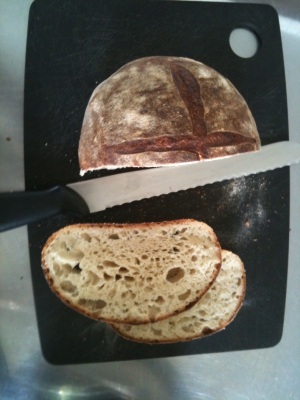 Potato bread.
Proved in a 400g round whicker banneton with linen lining for 13hrs at 4 degrees.
Cooked on a preheated baking tray at 250C for ten minutes then at 220 for a further ten minutes.

A couple of years ago, at the excellent Whitecross Street market, I bought a Tortano bread from The Power Station. This was a large ring shape and it had potato in it. The potato wasn’t obvious, but the flavour of the bread was exceptional.

I’ve dreamed of it ever since, buying it when I can, but that hasn’t been often. When I saw Dan Lepard had a recipe for potato bread in his book The Handmade Loaf, I decided to try it.

The recipe calls for honey and grated potato. This was my first long rise (prove) at such a low temperature (I usually prove my bread for about eight hours at about 15 degrees), and I was dubious it would work. My suspicions were deepened when I got the dough and it didn’t seem to have risen as much as my bread usually does. It had spring to it, and I tipped it out onto a preheated, polenta dusted tray (I always use Mermaid trays) and it still deflated slightly. I had two shapes on the go, one in a 400g round (which you can see above) and one in a 600g baton (which you can see in a minute). The slashes on the round one didn’t really have much effect and the loaf sort of burst out of one end. The recipe had called for a central fold, rather than slashes, but I hadn’t done this (tut, see what happens when you go off piste).

The baton shape I’d slashed on the top but also along one length.

Both breads rose beautifully, with a fabulous (I think anyway) crumb. The baton ended up being more successful in terms of loaf-look because of the beautiful fanning open of the long cut I’d made. I must warn you that this bread is just superb tasting. I had some for lunch with griddled peppers and a tomato salad. You can taste the sweetness of the honey, but not in an off putting way at all – even if you didn’t like honey I reckon you’d still love this. My boyfyhusband is currently eating his way through the second loaf whilst I remind him that it’s fodder for our daughter’s lunch box. I can’t even begin to think how delicious this bread would be if used for a bacon sandwich, with some chilli jam. Be warned. 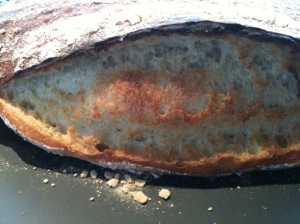