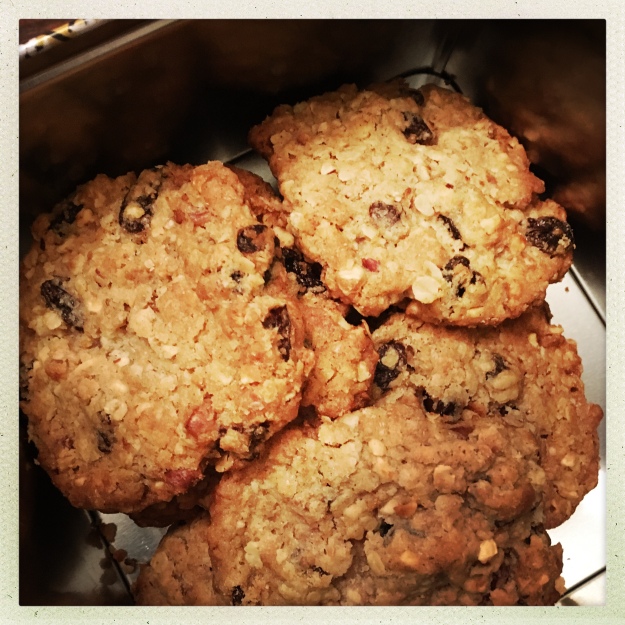 In the US sitcom, Friends, there’s an episode where Phoebe talks about how she makes the best oat raisin cookies.

I saw this particular episode a few weeks ago (we are watching the whole series again, introducing it to my youngest) and ever since, I craved a good oat and raisin cookie. So much so that when I went to a school open day and they were offering those ubiquitous giant cookies, even though I know they are nearly always crap, I searched out the one that looked like an oat raisin one. Sure enough, it wasn’t very good.

I am so suggestible that I still really craved a really good oaty, raisin cookie, then I remembered that, almost as a footnote, Hugh Fearnley-Whittingstall had a suggestion for such a biscuit, at the bottom of his chocolate chip cookies as in ‘if you want an oat raisin cookie, do this to the recipe instead of adding chocolate chips’. I had a half memory that I’d made them once and they were much better than you think they’re going to be.

Oat and raisin cookies don’t exactly make you reach inside the biscuit tin. It’s the sort of biscuit that would always be last to be picked for the team. And yet, these are now my new favourites and I think I could give Phoebe a run for her money.

I’ve adapted them from the original by decreasing the sugar and I use half and half plain/wholemeal flour.

The dough will be sticky, I roll up tablespoons of dough and flatten slightly on a tray. They don’t spread so much but still, leave a bit of a gap on a baking parchment lined tray.

Bake for 8 ins. They will be quite soft when they first come out but they harden up to a wonderful buttery crispness. I like to pretend they are healthier than other biscuits.

I’m actually on deadline for two pieces as I start on this. But what the hell. I see it as a warm up.

Every day I look for healthy things to make my family. And if the quest for healthy things is satisfied, my children will invariably not be impressed. The reaction to this was “but where is the pasta” followed by “it isn’t actually half bad”. My youngest – the harshest critic and who would, like her nonno, live off bread and Parma ham if she were able to – ate some. I can’t say she was a fan.

But I thought this was delicious and satisfies that urge for something healthy but tasty. And it has almost a kilo of green leafy stuff in it.

About six courgettes, sliced lengthways. Not too thick, not too thin. You’re going to chargrill them.

An onion, chopped up so tears stream down your face

2 x clove of garlic, chopped small (I can’t bear to crush them)

A small bunch of oregano chopped up

About 300-400g kale, trimmed of the big thick stems in the middle – rinsed

500g or thereabouts of ricotta

Rind of an unwaxed lemon

About 100g of grated mozzarella

About 100g of grated parmesan – like with the mozzarella I do it by eye and depending on size of container.

(quantities of cheese don’t have to be super exact but don’t veer off too much. Don’t sweat it if you only have 80g of each, say).

I do love a recipe you can make in stages and this is one such. First you oil each side of the courgette slices and chargrill them.

[I use a griddle pan which I bought years ago. It’s a Le Creuset one and it’s big and rectangular shaped and you lay it across two rings. I use it for so many things: not just veg but also making toasted sarnies. I also have a griddle ‘press’ that I used to press things down on. I just looked and my Le Creuset griddle costs £160 now! But I bought it nearly 20 years ago and it’s still going strong so it is worth it on a per use basis. The press I have is something like this.]

So griddle the slices until they are marked and a bit cooked through. Put to one side. If you plan to make this later you can just put it in a lidded Pyrex and put in the fridge, otherwise just keep on a plate until you are ready to assemble.

Then you chop the one onion with the two cloves of garlic and gently saute with the handful of oregano and a little olive oil. I add the seasoning at this point:  a good pinch of sea salt and some black pepper which I always angrily grind over food, as if in a fury. When the onion is translucent set the mixture to one side. Or put it in the fridge until needed.

Now you blanch the spinach and kale and you will think “how can we eat all this green veg?” but you can because it will reduce down. What I do is blanch it, drain as best I can, then I whizz the lot up (in batches unless your food processor is ginormous) in a food processor, and then I sit it over a fine sieve atop a bowl and press down with a potato masher. Because I make this in stages, and not in a great rush, I sit it over a fine sieve over a bowl for an an hour or so. You don’t have to whizz it up, it’s perfectly fine as it is, but you will need to carefully drain it in some way. You could sandwich it between two tea towels you don’t much care about. You then mix the drained veg with the onion and garlic and herbs. What I do is add it to the pan this is in, and for a few minutes just gently steam any remaining water out of the veg.

At some point you introduce to each other, via a fork: the ricotta and the lemon rind and the parsley.

So you now have essentially three things: courgettes, ricotta mix and veg/onion mix which you can assemble now or store for later.

It’s hard to say what size dish to use. Within reason you can use a normal family-supper sized dish. But I favour a square one that is about 25/26cm. Lightly oil the bottom, then when you are ready to cook you preheat oven to 220C.

Start with a third of the courgettes. On top of this put a half the ricotta, then half the greens, then sprinkle on a third of the cheeses.  Repeat and end with a layer of  courgettes and the last of the cheese. Mine was crammed to the top so I put it on a baking sheet in case it erupted (it didn’t). Cook for about 12-15 mins until golden and bubbling and crisp on the top. I didn’t taste it during making it and honestly expected something pretty healthy but bland. Well, no. It was really delicious. I served it with a crisp green salad made with a sharp dressing. Half of it fed four of us, but I suspect for people with larger appetites it won’t go so far.