I know this sounds a bit Marie Antoinette. And my immigrant Italian roots make me need to justify it to try to divest some of the guilt, but I have a Miele coffee machine. I never knew this was a really big deal (I just love Miele) until people starting coming round and saying “OMG, you’ve got a MIELE COFFEE MACHINE”. It’s as close as I’ll ever get to having an Aston Martin.

It wasn’t cheap, although I got it cheaper than most (media discount) and so that it was comparable with a really good counter-top model. It was my present to myself for having a HBAC (home birth after Caesarean). Well, when you’ve pushed a baby out through your vagina, with no more than two paracetamol, after previously having had an emergency C-section and forceps and every drug going, you deserve a pretty good frothy coffee. Actually I’d go as far as saying that the Miele coffee machine is probably the most expensive domestic coffee machine you can get. Even though, have I mentioned, I didn’t pay full price for it.

My relationship with coffee goes way back. As a child I think I remember drinking milky coffee from a bottle. Milky coffee, drunk from a bowl though now, is still my morning drink of choice and I always revert to it for several months post partum or when pregnant. When I was seven, my father opened a cafe on London’s Bayswater Road and we used to serve cappuccino. I used to ask him to make me a cup of what was basically no more than froth (the real thing was just way too strong for me back then). No-one really knew what a cappuccino was so I’d have to explain it a million times to the people I was serving saying it was “frothy coffee”. Most went into a blind panic and ordered a normal coffee or a tea instead.

Who hasn’t heard of a cappuccino now?

Anyway the Miele coffee machine is a very high maintenance machine. You have to clean it out every night (although the process is largely automated). God knows, over the years, what the cleaning materials amount to (because they have to be Miele). But the coffee it makes is just divine. No-one, save for my father, has ever made coffee that good.

But we’re six months in and we’re on our second machine. The first started making a noise that the engineer couldn’t diagnose. The second one broke at the first need for a ‘descale’. The engineer comes out again tomorrow and we’ll wait and see what his prognosis is. Naturally all of this is still free, cos we’re in guarantee. But still. Not really what you expect from a machine that costs as much as houses did in the 1960’s.

I still can’t hate it though. In fact I love it. There are no levers to pull such as my dad’s first coffee machine (a dark red, glossy Gaggia, and it needed real skill to operate), not even buttons. You just hold a finger to the touch sensitive controls and it does it all for you. Almost.

There are a couple of short comings however. There really should be a light in the machine, for when you need to open the door and clean it/fill up the coffee bean container/water etc. And you can’t get the espresso ‘short’ enough for a ristretto. That’s okay because no-one I know in this country drinks a ristretto. In fact most people don’t really drink espressos let alone the variations on them (ristretto, lungo, macchiato or correto). I’ve probably spelt most of those wrong but my written Italian has never been great and I can’t be bothered to look them up. Anyway these shortcomings are short.

The simple fact is, you can make perfectly good – great – espresso, using a stove top ‘Moka’.

And that’s what I did for years and years and years. That’s what all my relatives in Italy do (which is a fair representation since my family amounts to about 10% of the population). The more you use a Moka, the better it gets. I’ve no idea why. It’s a bit like a frying pan in that respect. But this makes it all so much easier. And no my coffee consumption hasn’t gone through the roof. I never have more than two cups a day. Just enough to keep Alzeimer’s at bay.

Of course if you want to add ‘froth’ and turn said espresso (please not the s, it’s not an expresso) into a cappuccino, you can make it using a manual milk frother but for best results you must never microwave the milk, only heat it on a stove top and not let it boil (there is an optimum temperature, I don’t know what it is though as I’ve never needed to get that technical). I’ve noticed lately there are loads of electric milk frothers on the market – Dualit and Lakeland both have models. You just add cold milk here and it does it all for you, heats it and froths it in one. 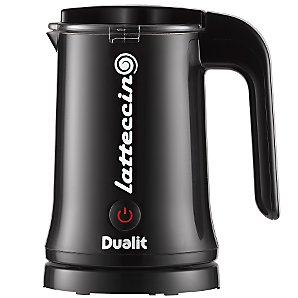 I’ve not tested them yet but both seem to have complaints of low capacity.

Talking of capacity, a real, proper cappuccino should never be in a huge cup. That’s just wrong!

Alessi used to do a great electric espresso maker that you plugged in (it doesn’t do it anymore). Great for office use, or anywhere where you don’t have a stove top. I bought one for my partner one Christmas and it worked wonderfully until he put it on the stove one morning.