We built our last flat. Well, when I say ‘built’, it was a space with four walls a floor and a ceiling, and it was already there in a Victorian warehouse. But we bought it as a ‘shell’ with no services ‘n’ stuff. At the time – over ten years ago – this was still pretty rare in London. So rare that only two mortgage companies would lend us the money without a retention (keeping a large portion of the loan until the flat was done, which rather negates the need for a mortgage). They were the Halifax or the Woolwich. The former wouldn’t lend us as much as we wanted though, and the Woolwich would only lend if we hired an architect.

At the time – I remember the conversation clearly, I was sat at my desk on the 18th floor of Canary Wharf tower – I cried. Every penny had been accounted for, there was no way we could afford an architect. But in the end, in the way these things work, it was a huge blessing in disguise as we appointed the brilliantly gifted Simon Conder.

(This was our flat, nice eh? Sadly no pic of the fridge, which I’m getting to..)

He saved us money, he designed us a fantastic flat and he over saw the entire project.

Anyway. He designed the whole kitchen around the fridge we wanted which was an Amana stainless steel side by side monster. It had an ice maker. It was bigger than any fridge I’d ever, at the time, seen. It cost lots.

We didn’t have the money when we moved in, but it was winter so we used the window sills to keep our food cool. Very eco and probably trend-setting. In between this I won an award (for Beauty Journalist of the Year) and I got a cheque for £1,000. As I went to collect the cheque from Katy Puckrik I remember saying “I can buy my fridge now,” which was really my focus.

The fridge was great, but not so great I’d buy one again. The problems are that you have two side by side vessels which means neither side is very wide. I like fat fridges, I discovered, some years into owning the Amana. Fridges I can put entire turkeys into, even though I’ve never cooked an entire turkey. The ice maker however was fantastic and, pre-Wiis, a great way to keep teenagers entertained. It had loads of ‘zones’ that did different things and sent me running to the instruction manual each time to clarify what they were supposed to do. But it was a good, handsome, fridge. A birruva liar, because despite its promises it did need to be run down and defrosted every two years or so, otherwise it started to leak (it never frosted up though). And you’d think once every two years isn’t too much to ask, but it always seemed to spin round so fast.

When we moved to our current house, with its tiny kitchen with hideously expensive but still hideous carved (dark) oak kitchen cupboards, we knew it was only a matter of time before we ripped everything out and started again. In the meantime we had to make do with a tiny, undercounter, totally ordinary fridge which also froze anything that went too far into the back. It wasn’t capable of storing anything like the number of pies and crumbles I intended to cook.

When we started to look for a new fridge, I did of course start looking at the biggest fridges possible and worked my way down. What I knew was that I wasn’t interested in silly, pointless extra features. I didn’t care about ‘zones’ anymore because you just ended up putting stuff where it fitted/you could reach/looked nice. I wanted a fridge that just did what it was meant to: chill food. But, and this is important, I was completely not into a fridge that looked good but had a C energy rating, it had to be A or A +. I started off thinking in terms of two giant appliances. A big tall larder fridge and a big upright freezer. But when I thought about this, I realised that unless you grow your own (we don’t, yet) you end up just losing food in the freezer.

Then I decided we really needed was not a double unit but a triple one. Fridge, freezer, wine storage. I mean, think how much space we’d save in the cupboards! 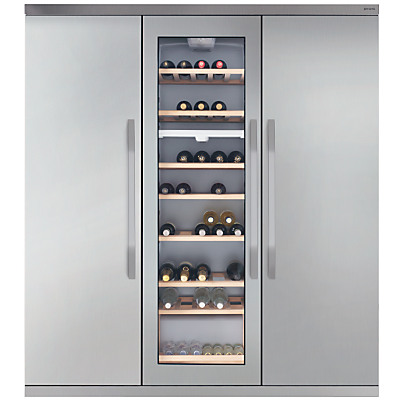 I still think this is a beautiful thing. But in the end I decided to go to the Miele Experience Centre in Abingdon. Now, as I write this, I am pretty pissed off with Miele (viz coffee machine). Since I wrote that post, I’ve had to take two days off work, and twice the engineer has not come – ringing but at the last minute cancelling. The latest is that the spare parts have to come from Mars, or somewhere like that, and it will take til January. So yes Miele does spare parts and holds them for twenty years, but whether you can ever get them is another matter. But even being cross, I can tell you that the Miele Experience Centre is an experience. Every appliance is out there for you to look at. The staff were fantastic. I went there with zero intention of buying a coffee machine (“for goodness sake” I spat at my boyfriend, “you can just make perfectly good cappuccino with a Moka and a whizzer thing.”), but the woman (middle aged, softly spoken, kind, like something out a 1970’s sitcom) convinced me.

I ended up with a big, fat, wide fridge and a smaller freezer underneath. There is no point me showing you a picture because it’s impossible to find one with the thing shut. It has no fancy pants zones, it’s A++++++ rated and it has LED lighting inside which is the only showy offy bit but actually I find it really useful and can’t now imagine a fridge without runway style lights inside. It has the temperature on the outside which is the only other bit of gizmo it has and again I find this really helpful now (4 degrees being optimum for fridge, -19 for freezer).

But you know my favourite fridge of all is still our old Frigidaire that I grew up with. It was small, had a tiny ice box, lasted forever and of course was always full of good things. I miss that fridge.