The reason sourdough, or natural leaven bread means so much to me, the reason I go on about it so, is that bread is the final frontier in cooking that I’d never been able to master. I’ve baked since I was seven (I used to make the cakes for my parents shop on the Bayswater Road in west London, probably illegally but there you go). But I’d never been able to make bread. I never worked out why. When I was a child I couldn’t wear a watch, they’d stop when I put them on. And if I ever tried to make anything with yeast in it, it’d die.  My bread was awful. I tried things like Danish pastries, thinking that maybe cos they were a cakey thing, I might have more luck. But no. It was actually hard to take failure, over and over again and I felt like you do when computers give you problems. Like it’s personal.

Some years ago, I went diving and fishing with a Michelin starred chef. I told him about me and bread. He laughed. “Anyone can make bread” he said, sounding like the chef in Ratatouille. “I can’t” I answered mournfully. “Come to my kitchen,” he offered. So I went.

He made the dough for the day and put it in this huge mixer. Then he asked me to shape it or something. I can’t remember now, but anyway, I touched it. We were making the bread for the entire evening’s covers. To cut a long story short, cos you must surely know what’s coming,  the bread I’d touched failed. The fact that I’d told him this didn’t appease his temper. He looked at me like I was a witch and not long after I found myself on the pavement outside, crushed.

Eventually bread makers came onto the market and I even failed with those, but I realised that’s because we had a shit bread maker. Our downstairs neighbour, the lovely Sarah, used to produce these huge loaves for her and her husband Ben. Her bread machine was a Panasonic (still the only make of bread maker I’d recommend) and eventually we bought one and what do you know, as long as I stayed away from the mixture with my hands – very easy to do with a machine – we were okay. As time went on, I got confident again. I really don’t know if bread senses fear but maybe it does. Because as I got more confident, I started making bagels and pizza, using the machine to make the dough and then shaping it myself. Success was mine. I don’t know, perhaps having children changed whatever freaky wiring I had going on that was such an efficient killer of bread dough. Perhaps the hands that had always been so cold, but made great pastry, were starting to warm up. The point is, I was able to make bread.

But my eye was always on the big prize:  sourdough. Proper Italian bread is sourdough bread: made without yeast but by using a starter of, basically, flour and water which uses wild yeasts that are present in the air and on the flour. In Italy we call this leaven a ‘biga’. Some bakers call it ‘La Mamma or La Madre’ – the mother. Fitting because the starter you, yes, start with, you make all your subsequent bread from. You use a bit of your starter every day to make your bread (or discard it if you’re not making bread) and then feed (or refresh) it with more flour and water. Some starters date back many years. It’s said that the starter that makes the famous Poilan bread dates back to 1932. Certainly the longer a starter has been going, the better it is and the more flavoursome the bread.

Sourdough bread is big, holey bread which you can’t squash into putty. It is deeply flavoursome, has a low GI (thus very satisfying) and can make a meal out of the most humble of ingredients. Add a squash of Brie and a few roasted peppers in olive oil and I’m happy. If you live in a big City – certainly London – you can buy sourdough bread pretty easily. But here, in Suffolk it’s not so easy.

Every weekly trip to London saw me coming back with something from Flour Station or Paul’s and I’d text my boyfhusband on the way home and say “we have good bread, we have a meal.” But I wanted to be able to make this bread myself.

I’d bought Dan Lepard’s The Handmade Loaf some years previously. I’d started a starter from his instructions which had looked promising, but then I got pregnant and other things occupied my mind. My friend Lucy gave me a bit of her starter but I’d let it go off in the back of the fridge. Then finally my friend Emily offered to send me some of hers. This seemed such an act of friendship and I liked the fact that Emily – whom I’d only ever got to know on line (I used to co-run a parenting forum), could send her starter across the country, in the post, and I could make bread from it.

It came. I tipped it into a Kilner jar, fed it for two days and opened the first recipe in Dan’s book, which was for white leaven bread. Dan’s recipes are deeply prescriptive: 8am, do this, 8.10am do that. They had put me off at first because it seemed you had to spend all day making bread. Maybe this was why sourdough loaves cost so much. But in fact it wasn’t so. It suited me perfectly. I found the bit that took the most time was the beginning, and refreshing the starter. Otherwise you hardly kneaded it at all – 10/15 seconds at a time. Leaving it to rest for 10 mins, 30 mins, an hour…it meant I could do it in between feeds/reading to my children/preparing dinner etc.

The first loaf I made I started just after school pick up, which is still the best time for me to make bread. I had already decided to be Master of the sourdough in terms of this: the final rise called for a time of 4-5 hours. I knew I could never stay up that long, so I decided to just leave it to rise overnight in a bowl lined with a teacloth on the concrete floor of the laundry room. At a temperature of about 15 degrees. I decided that the bread either had to cope with this, or it had no place in my life.

The next morning I got up and very clumsily took the bread off the teatowel, which it had stuck to, and wobbled it onto a cold baking tray (my technique finessed incredibly fast, fear not). Dan said an oven temperature of 220 for 50-70 minutes. After 30 minutes my loaf was frazzled.

I was upset, of course, but as I cut into the loaf I realised that there inside was proper sourdough. What’s more, as it cooled, I realised the crust had this wonderful taste. I was so excited that I sent a picture of it to Dan (whom I don’t know, but I figured he’d not be too freaked out as we work for the same newspaper) and he replied saying he thought it looked great and it looked better than his first sourdough. He probably says this to everyone, but I chose to believe him.

We – boyfyhusband and I, not me and Mr Lepard – ate it with a poached egg (Burford Browns) topped with herbs from our garden. I almost died of happiness that morning. I told everyone, all day, all week, that I had made bread. With my hands. I think I sent a picture of my sourdough bread to everyone with an email address. Finally. 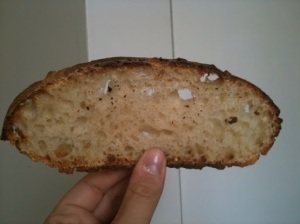 First ever sourdough. Look at that crumb! This was proved in a bowl lined with a teatowel for nine hours at 15 degrees. I didn’t slash it, I cooked it for 30 minutes at 220.
And it worked.

11 thoughts on “First fumblings with sourdough.”