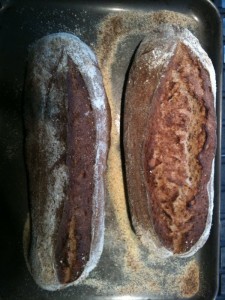 Rye and wholemeal, supposed to be Barley and Rye bread, cept I got distracted.
Proved in two whicker 600g baton bannetons for ten hours at 4 degrees. Cooked on preheated tray at 250 for ten minutes then 220 for ten minutes. Slashed with a professional Mure and Peynot grignette with a curved blade. One worked more successfully than the other. Not sure why.
Today’s bread was supposed to be Barley and Rye bread from Dan Lepard’s The Handmade Loaf. I’ve rather overdosed on white flour bread and even though sourdough is low GI, and I use stoneground, organic white flour, I really started to feel I needed to make a loaf that wasn’t just white flour.
The majority of sourdough bread has a tendency towards white flour use. White flour does the work in keeping the bubbles of sourdough up in a way that other flours can’t. This recipe called for a rye leaven, 300g white flour and then 100g each of rye and barley. I’d just had a chat with another budding baker friend about wanting to use more wholemeal so that’s what was in my head and that’s what I reached for instead of the barley flour. Anyway, it’s no bad thing. As you’ll see it still uses mostly white flour. *sucks teeth*
I’d made this loaf (using the correct ingredients) before and it’s delicious. A really subtly delicious loaf and great for sandwiches (what I also love about sourdough, because have I mentioned that I love it, is its keeping qualities). 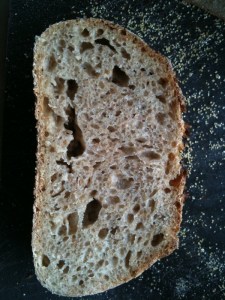 Rye and wholemeal crumb, second slice, it will only get better as I get further into the loaf. 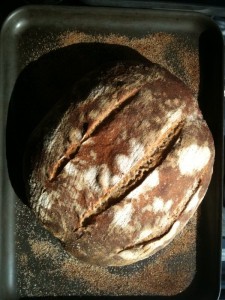 Barley and rye bread made with proper ingredients and an 11hr rise at about 12 degrees. Dan Lepard described this loaf as having a “bold beauty”.

3 thoughts on “Rye and Wholemeal bread”