So. I’m starting to crack the making of sourdough in this extreme heat. The optimum heat for making and proving seems to be in the 18-21 degrees range (for me, at least) but even though my kitchen is pretty cool, me living in the country ‘n’ all, it has reached temps of 25.

This has made proving tricky, so I’ve cut down proving times in a most scientific way. Er, by roughly 20%.  And then not always cos if I’m feeding the baby/trying to get her to sleep/doing almost anything, I forget, get distracted and then my giant timer tells me that I’ve run over by 38 minutes or something.

It’s not been so bad when the sourdough has included low-gluten flours like barley or rye, but when it’s pure white, it’s sometimes been a struggle to keep the dough on the table top as it spreads out. I’ve heard tales of ciabatta dough being so frisky, bakers have had to chase it round the kitchen.

The heat has also made me sometimes panic whilst handling the dough. And one knows one must never show fear in baking.

Absolutely essential has been oiling the surface you’re working on. I use a large Top Gourmet chopping board. This means that, in my busy kitchen, I can move the bread around easily if surfaces are needed for something else (because let’s face it, making sourdough takes all day so you do need to do other stuff). I can sometimes get away with not oiling the surface, especially when making breads containing what I call ‘healthy flours’ (i.e. anything but white). But it really can make the difference when working with white flour, in the heat.

The other day I made a giant potato bread loaf which I hardly handled at all (it was really hot and the dough turned to glue the moment I touched it), I used just a dough scraper.  The bread was fantastic, but I do think it suffered from the lack of loving.

Anyway, yesterday I could tell straight off the dough was going to be good. I put it to prove at 4 degrees (i.e. in the bottom shelf of the fridge) for six hours, then took it out and put it at 20 degrees for three hours.

Then I did something which has no rhyme or reason but seems to make a huge difference. I pre-heated the trays, as per. I used ice cubes as per, but I heated the oven up to 220 and then when the bread went in, I put it up to 250. I did this the very first time I made sourdough and sort of forgot about it, because usually what I do is always crank it up straight away to 250 (because you’d think the hotter the oven is to start, the better, no?). But something about turning the temperature up as the bread goes in makes for a much better crust. I cooked it for 15 minutes at 250 then down to 220 for another 20 or so.

It is a fucking marvellous loaf. Here it is. Tell me I’m not a total genius. 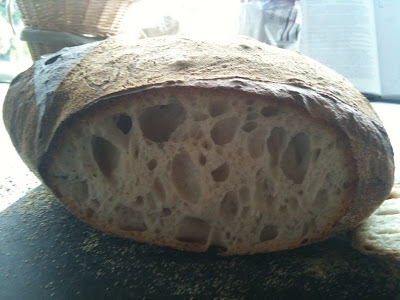 It tastes wonderful, really sour, tasty crust.I love it so much I’ve thrust it under the nose of almost everyone whose come through the door this morning. My dad has had to say “fantastico” at least seven times.

6 thoughts on “The best crumb yet”