When I was a child, my mother would cook regularly with fresh yeast. We would have pizza every Friday night, which she would  make in a large rectangular tin; leaving one small section free of tomato sauce for me, as I didn’t like it.

Then the local supermarket stopped stocking it and we bought it from this ‘exotic’ – at the time – little shop that was a Chinese health food shop and I’d have to go far into the back to find the small squares of fresh yeast.

These days it seems impossible to find commercially. Which surprises me given the resurgent interest in baking. Those who do buy fresh yeast either beg it from the bakeries of huge supermarkets or order it in in bulk.

I believe it was the latter that my friend Wendy did, as she took delivery of 2K of yeast. Wendy cooks and bakes ALOT and hangs out with professional bakers and really knows her shit where food is concerned (and antiques). Generous to a fault, she offered a large chunk of this purchase to me and thus it was that on Saturday, the postman delivered half a kilo of fresh yeast to my Suffolk mail box.

(n/b: Wendy tells me you can also get fresh yeast from local bakeries, but I have none near me.)

It had been decades since I touched fresh yeast. I’d forgotten how squidgy it is. But I immediately set about baking with it. When I first bought Dan Lepard’s The Homemade Loaf, the book that set me off on my sourdough journey, I was disappointed to see how many recipes called for fresh yeast. Dan helped me convert fresh yeast = dried yeast but the moment I have to substitute an ingredient for another I feel like I’ve failed (it’s okay, I’ve had years of therapy).

I have never cooked with fresh yeast so I started off with something simple, which is Dan’s Milk Loaf in the Handmade Loaf. It uses plain and strong bread flour, butter, milk, maple syrup and fresh yeast. It was so easy to make. Minimal kneading, then a final prove of an hour and a half. As it was very cold in my kitchen yesterday, I let it go a little longer. I’m so used to being upstairs working when my timer goes off for sourdough. And being able to play loose with timings, and just ignoring the timer, that when I came down to see the loaf, I was a bit shocked to see how much, and how fast, it had risen and for a moment worried that I had let it overprove. But no.

It came out gloriously. It looks like a pair of breasts (a friend thought this was why it was called milk loaf..) this is because you put it in in two ball shapes, although you could do it in whatever shape you want; and the crumb is superb. Wendy tells me this is not a traditional shape for a milk loaf, that it should be cooked in a cylindrical tin with ridges but I do not have one. 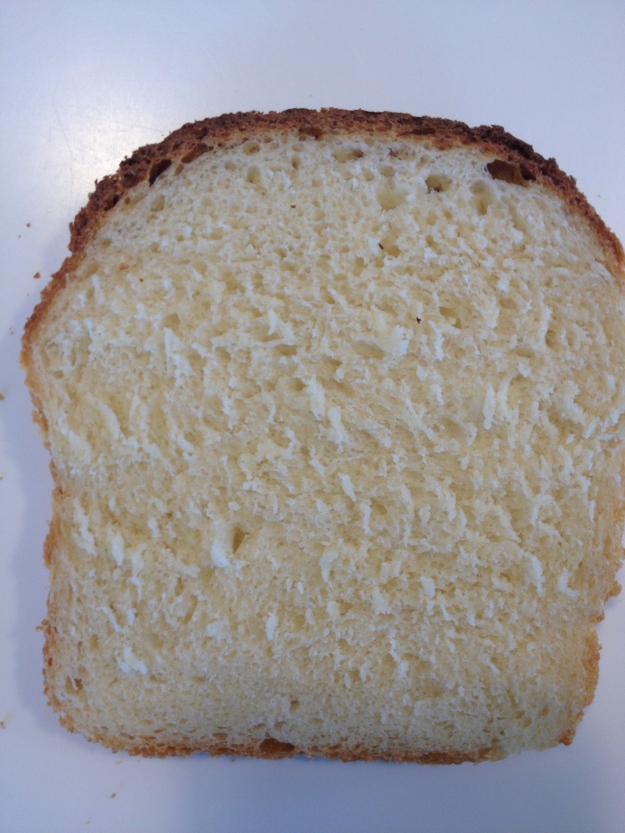 We all had the most delicious ham sandwiches made out of it. It’s an old fashioned taste and not like anything you could buy. I adore my sourdough, but it was so nice to be able to have a loaf on the table in time for lunch, having just thought about baking it in the morning.

Because I understand how incredibly frustrating it is being given a recipe which ingredients you don’t have, here are Dan’s milk loaf recipes containing more readily available dried yeast. I might try his chocolate chip milk buns next…

I froze the rest of the fresh yeast, in 15g batches in little sealed bags. Weighing it out, tipping them into those little bags. My eldest helped so we had quite a production line going.

Update. I made them into rolls and divided up half and put chocolate chips in them. The rolls make great sandwiches for picnics, the chocolate rolls make a nice, not too sweet alternative to a pain au chocolat, dipped into caffe latte.

Day after notes: This bread stales up pretty quickly. It makes great toast/toasted sandwiches though, so no fear. Also we just had it several days old made into French toast and I can report that it was excellent.