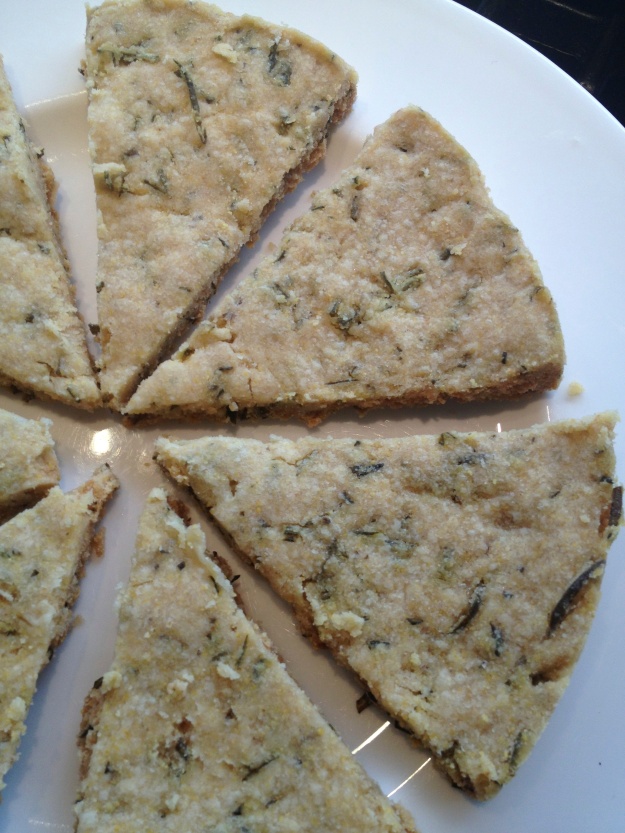 These won’t be to everyone’s taste, but I loved them. They’re easy to make, almost impossible to get wrong (unless you chucked them on the floor or something) and unusual. Like rosemary shortbread but with the advantage of no butter at all. I gave these to my father waiting, waiting, for him to say “too rich, too much butter” (this is what he always says about all my baking). So i could pounce and say “aHA, no butter in these NONE NONE and by the way, that New Year’s Even when I said I wasn’t out in a club aged fourteen I WAS and I’ve sustained the lie over thirty years.

Ahem. Exorcising a few ghosts there. I think this would be lovely with some rich vanilla ice cream or maybe a very strong espresso.

The recipe is here, on the Easy Living site. I have to say, I was very much not impressed with Easy Living the magazine in recent times. It had gone all silly and light weight; but they really lost me when they described women who breastfeed (and, I suppose, go on about it?) as breastfeeding Nazis or the Breastapo (I can’t remember which, but you get the idea). This is such an offensive term and belies a real ignorance of history.

I complained, and some flippety gibbet replied, completely not understanding my point. That was it, it was over for me and Easy Living.

The magazine has since folded but exists on line and its recipes are really good, and definitely worth checking out, even if the rest of the content, in my opinion, is as sustaining as a rice cake.