I have become slightly obsessed with this apple crumble. It appeared in Good Food magazine in October (I cannot find a link to it on line) and my photograph doesn’t do it justice. But it’s one of those puddings that, once served up, I itch to eat and cannot be bothered to really photograph.

I have made this a lot recently and my partner says it tastes really Christmassy. I agree, but it only really started tasting Christmassy as we got into late November…

The ingredients for the underneath bit:

Zest and juice of one lemon

4 Bramley apples, about 800g in total, peeled and cored and cut into wedges or rings

The ingredients for the crumble topping:

Put everything for the underneath bit, save for the apples and lemon juice, into a pan and cook on the hob until the butter has melted and the sugar is syrupy and it looks nice. Then toss into the pan (once off the heat) the apples with the lemon juice, mix around until all coated and put in a suitable oven proof dish. I use a Le Creuset thing that is approx 20cm square.

To make the topping I put the flour and butter into a food processor and go past the fine breadcrumb stage and pulse until big clumps form. Then I stir in the sugar, oats and almonds. Spread this on top of the fruit mixture. At first it will look like you don’t have enough mixture but don’t panic as it all works out. Cover with foil and then * put it into the oven for one hour in total, but for the first thirty minutes keep the foil on, then whip it off to let the crumble brown, for the last thirty.

Leave to stand for about 10mins before serving with custard or cream or ice cream or all three. Oink, oink.

It’s delicious and wonderfully comforting and warming. I hardly make crumble any other way now, although I might find it all a bit much come the spring time.

*note: you can easily make this a few hours ahead, assemble, cover with foil and then put it in the oven as you sit down to main course.

Apologies again for the not great pic… 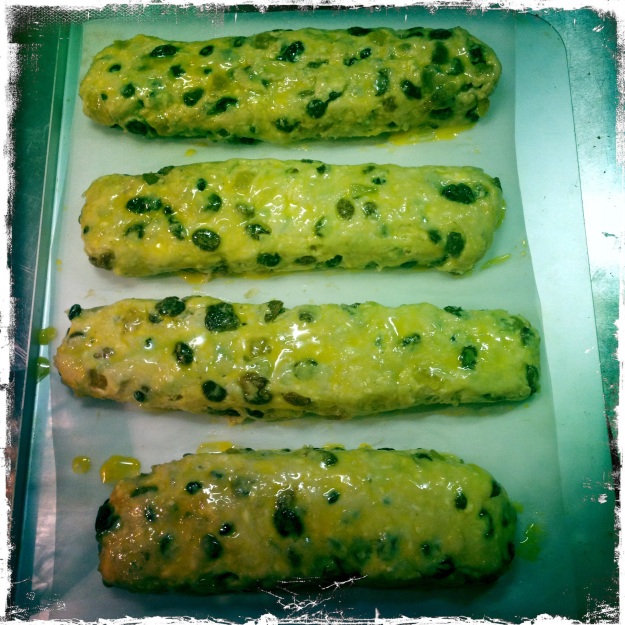 Stollen was, like panettone and panforte, one of those things that appeared at Christmas that really wasn’t very nice. Of course, that was back in the days before I realised you could make, almost, anything yourself (I’ve still not been brave enough to try panettone, because to make it properly takes three days and involves hanging it upside down).

My friend Lisa Durbin, posted some pictures of the stollen she was making and they looked so delicious, I asked and she passed on her recipe. And yesterday, really quite late in the day, I decided to give it a go.

I have a few notes to add, which is that the marzipan stipulated seemed a bit mean to me to begin with, so for one of the loaves I doubled the amount from 50g for each loaf to 100g. As I was doing this, my partner walked into the kitchen and he reminded me that, actually, with marzipan in cooking more is not necessarily a good thing. So, suitably chastened, I went back to Lisa’s recommendation of 50g for each loaf for the others. I haven’t tasted the turbo marzipan one yet but the one with ‘just’ 50g held out his theory and Lisa’s recipe.

After making this stollen, ahem, a couple of times, I’ve settled on 75g per stollen as perfect for me.

This stollen really doesn’t keep. If you don’t freeze it EAT IT on day of purchase. It won’t be so good again after that. 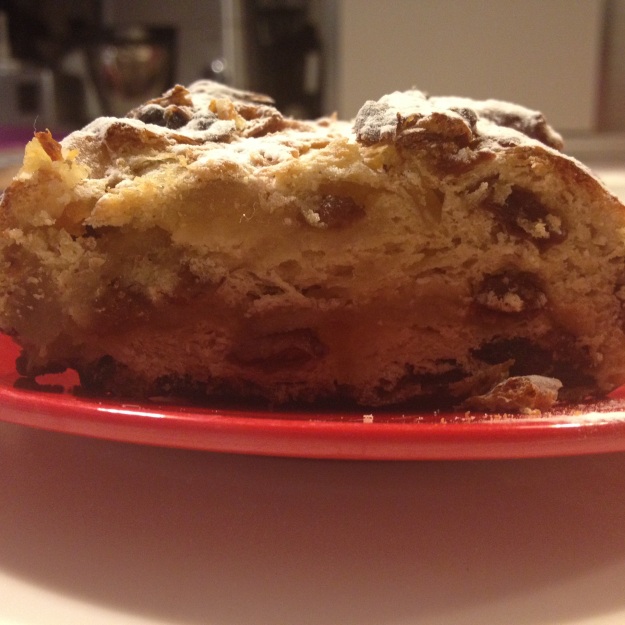 I also didn’t roll mine out on a floured surface, instead rolling out between two sheets of Magic Carpet type stuff (reusable baking parchment). It’s up to you if you make your  loaves more stout and thick or long and thin. Experiment.  As per picture above, you’ll see mine are quite flat.

I ate half of one, about 20mins out of the oven, whilst watching Masters of Sex. So the two things are now, indelibly, etched in my mind. At that temperature, just warm, the stollen are frangible and seriously delicious. If you can eat it at this temperature, at least once, do so. 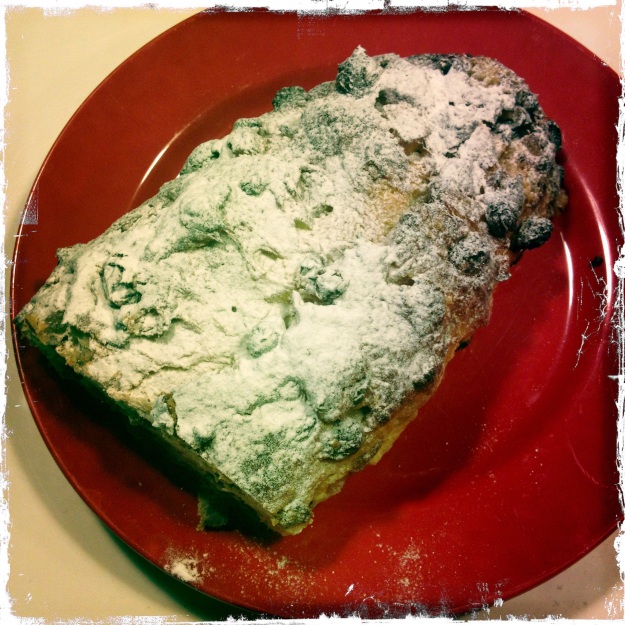 Otherwise they are really not difficult to make (although if I give you one as a present then, yes, of course they are really difficult) and you get four loaves so it’s a good result vs effort. You could easily freeze some Lisa tells me (before you add the icing sugar) for another day. Or just eat them all in a stollen frenzy. You can also leave them for the final prove (the one that takes 45 mins in Lisa’s recipe) overnight in the oven, waking up to freshly cooked stollen (well, for YOU to wake up to freshly baked stollen, someone else had to get up first to bake it, but the idea is there, yes?) 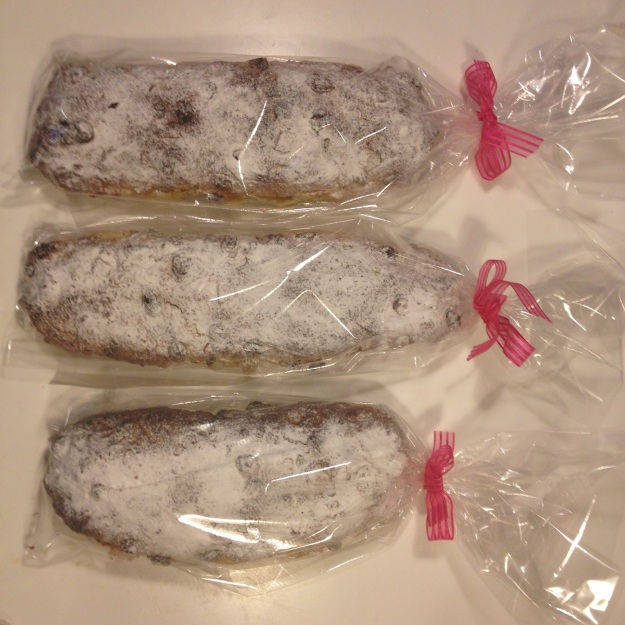 Christmas 2014. I made these mini this year, just cutting bits of the dough off, and rolling it with my fingers around some marzipan. Worked really well and I got about 20 mini loaves out of it. I cooked the mini ones for 15 minutes. 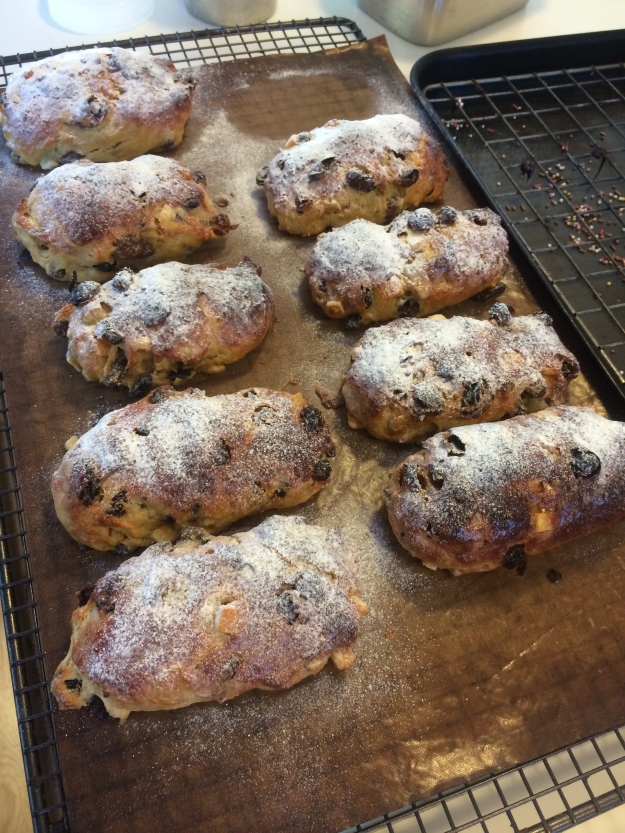 (You’ll note one is missing, it’s very important to test the merchandise before selling.)