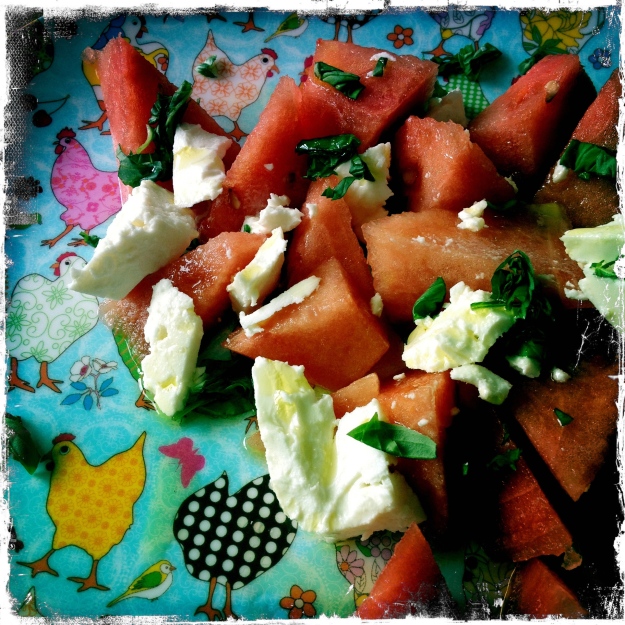 Eating watermelon makes me think immediately of southern Italy, where I spent so much of my childhood. It’s so evocative, it almost makes me want to weep.

Childhood life in Italy was so different to life in London. In London we lived in a two bedroomed flat in a mansion block in west London. Opportunities for roaming the streets were few and far between. In Italy, almost from the moment we stepped foot onto the dusty soil of my mother’s home village in provincia di Avellino, we were free. My mother had her mother, cousins, sisters etc to talk to, we had streets to explore and railings to climb and old houses to dare ourselves to enter. I spent most of my childhood summers wearing a pink and white towelling bikini, playing out with friends, until I was called in to lunch, or dinner, or ‘per la merenda’ (a mid afternoon snack). We frequently ate watermelon, spitting the black pips as far as we could, sitting in the shade of the porch, whilst the grown ups had their afternoon siesta.

This recipe is by Ottolenghi from his Plenty book. It doesn’t seem like much but it is plenty (ha ha). Ottolenghi says you should “eat this on the beach, or at least outdoors, on a hot day, with the sun’s rays unobstructed’. It’s a perfect summer lunch and basically, an assembly job.

You take some chilled watermelon which you’ve cut into wedges, some feta which you’ve cubed, some basil leaves which you’ve torn asunder and a small red onion which you’ve sliced thinly if you like (if not, leave it out). You put the melon and feta on a plate, sprinkle over the basil and onion if using and drizzle some olive oil over the top. That’s it. But don’t dismiss it because of its simplicity, it’s got lots going on.